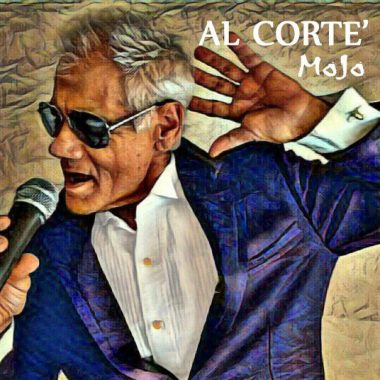 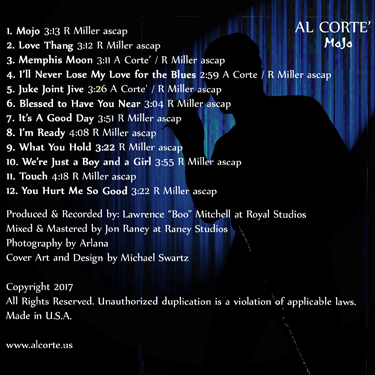 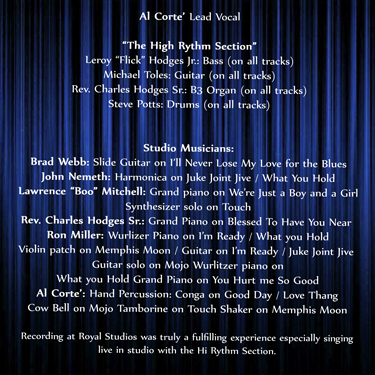 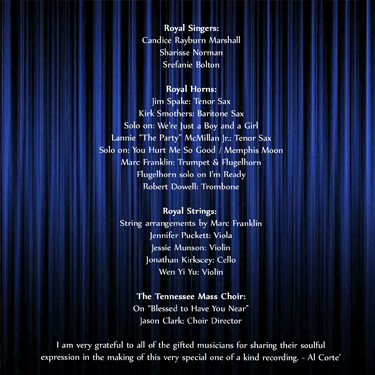 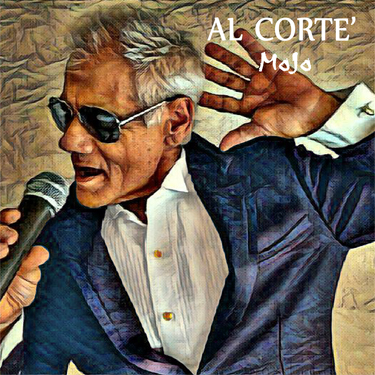 Recording at Royal Studio was truly a fulfilling experience especially singing live in studio with the Hi Rhythm Section. I am very grateful to all of the gifted musicians for sharing their soulful expression in the making of this very special one of a kind recording. 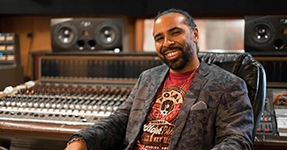 A special thanks to Boo Mitchell for producing an awesome array of very talented Memphis musicians for the recording of “Mojo”. It was a real kick observing Boo orchestrate the day to day wheels of motion at Royal Studios. Every session was a new adventure that he set out to conquer and there was victory at the end of each session day. It was a roller coaster ride that took us on a magical musical tour returning a cargo full of unprecedented recordings that make up this album I appropriately named “Mojo”

The Hi Rhythm Section – “They are the real deal” 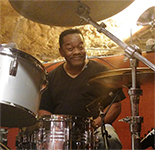 Steve was the heartbeat of the recording sessions from the first click of his sticks to the final beat of each song Steve kept a solid foundation for everyone to express themselves freely. Steve is a human metronome with feel giving every player a pocket to perform. It was a true pleasure working with Steve he is warm kind gentleman and real pro. 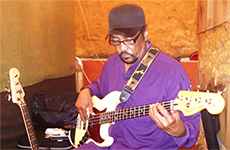 Leroy is king of groove! When it comes to finesse and feel there is no better than Leroy. No matter what the material Leroy weaves a groove that threads every song with soul.  Leroy is one with his instrument when he straps on his bass you can feel the love from across the room. Leroy was the only musician I could see during the recording and I will never forget the intensity and compassion in his playing. Leroy is a regular guy I enjoyed my studio time with him.

Charles is a master of the Hammond B3! I have worked with very talented B3 players throughout my career and there is no question Charles is without a doubt the most accomplished organist I have ever had the pleasure of singing with. Charles really knows how to work with a vocalist he is a very inspirational performer that knows how to inspire and embellish a vocal line. Charles does things with a B3 that I have never heard anyone ever do. Charles is a very caring and considerate man with a charismatic talent.

Michael is a fun guy he was a pleasure to have on the recording sessions there was never a dull moment with Michael in studio. Michael is very innovative he has a great playing style and knows how to give a song what it needs. Working with Michael in studio I could feel the passion he has for his guitar it’s like a love affair. When Michael makes love to his guitar magic happens. I love what he did on the tracks for my new album! Michael is a kick to have around and a phenomenal guitarist.

Brad Webb: Slide Guitar on I’ll Never Lose My Love for the Blues

John Nemeth: Harmonica on Juke Joint Jive & What You Hold

Rev. Charles Hodges Sr.: Grand Piano on Blessed To Have You Near &

Guitar solo on Mojo  / Grand Piano on You Hurt Me So Good. 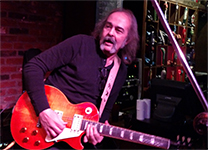 Brad is a Beale Street Brass Note recipient for a reason and a one of a kind blues guitarist. I was hoping we would have a guitarist that would lay down some sexy blues slide guitar for one of the songs and Brad took the song to another level. 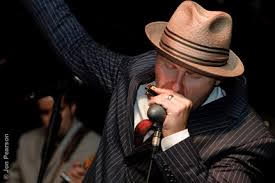 John is a blues purist and a real pro! I was hoping to have harmonica on a couple of songs and asked Boo if he could bring in a top flight harmonica player. It was very cool hearing John lay down a very unique harmonica style that fit like a glove. 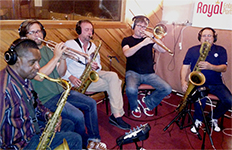 I have been a team player all my life and when I witnessed the Royal Horns at work it was very moving. These boys didn’t have to discuss much they are in the game and  they can read each other without saying a word. These guys pulled off head arrangements that sounded like something Beethoven would write. An incredible horn section! 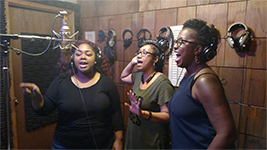 I have heard the expression “sing like angels” but never really seen or heard any until I met these angels. These girls are real angels and they delivered above expectations. Working with the Royal Singers was pure fun and they knocked it out of the park. 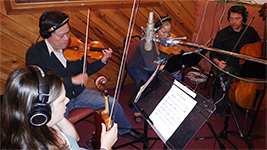 professional musicians the Royal Strings displayed nothing but professionalism. It was something you don’t see much of today musicians that can sit in front of notes on paper and turn the dots into beautiful musical accompaniment.

On “Blessed to Have You Near” / Jason Clark: Choir Director 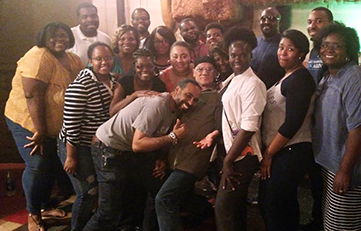 Having the Tennessee Mass Choir was truly a very moving experience for me. It brought back memories of when I was a young boy singing in the church choir. Jason Clark assembled a fantastic group of altos, soprano and tenor singers that performed an eloquent vocal performance lifting the song above the clouds into the heavens. 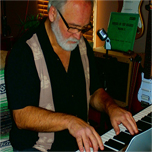 Ron is a very talented songwriter/musician that I met in the studio during the recording of “Seasoned Soul”. Shortly after the recording session Ron approached me about songs that he wrote and asked if I would consider recording some of his songs. Ron and I spent about a year preparing songs for an all original album. After months of fine tuning the songs and arrangements we set out to record in the studio and Mojo was born. 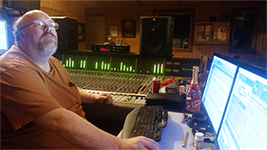 Jon has been in the recording business for decades having the skills to make a recording sound like it should. Jon is a top flight recording engineer and based on the results of what Jon has done with Mojo there is no denying he is one of the best in the business.